Raise a Pint, Brew a Dream 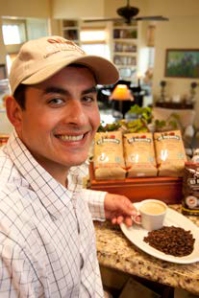 The promotion, being offered from April 15 to May 31, 2013, will support small businesses by raising funds for the Brewing the American Dream program. For every Samuel Adams Boston Lager draft purchased, from a participating location, The Boston Beer Company will contribute $.05 to our Samuel Adams Brewing the American Dream Fund. And the great news is there are over 10,000 participating bars and restaurants across the United States!

Since the Brewing the American Dream program began in 2008, more than 230 loans totaling over $2 million have been made to small businesses across the country. One of those loans was to Alberto Boleres of Chicago.

Boleres came up with the idea to start his own café while serving in Iraq. He witnessed the camaraderie at a coffee shop near his residence and found his passion. He returned to the U.S. as a Purple Heart Veteran with the goal of knowing the coffee industry inside and out. Alberto was determined to start his own business.

He traveled to Guatemala, his father’s home country, and completed coursework on everything from being a barista to learning the logistics of importing and exporting products. After researching the industry for 2 years, he decided to sell coffee wholesale to restaurants, corporations, and hotels and eventually decided to open his own café. With a business plan in place and new customers eager to buy, Alberto was ready to start selling coffee.

A $3,000 loan from Accion’s Samuel Adams Brewing the American Dream program gave Alberto the ability to buy coffee of five delicious varieties: pacamara, peaberry, espresso blend, special blend and bourbon. He was able to achieve his goal of starting a small business and has since received valuable marketing advice through one-on-one counseling from a Samuel Adams employee. Today, Alberto sells his coffee to restaurants, cafes, hotels, country clubs, bed & breakfasts and online. To check out his delicious coffee products visit www.boleres.com

This spring help entrepreneurs like Alberto Boleres make their dream a reality! Remember, if you’re going to
enjoy a pint make it a Samuel Adams Boston Lager and support small businesses across the U.S.!

← From an Intern
La Idea and Accion featured on Univision →